Giacomo Puccini was born in Lucca on December 22, 1858, into a family of five generations of musicians. After the early death of his father, he became the organist of Lucca’s Duomo. He studied at Lucca’s conservatory and later, thanks to a scholarship from Queen Margherita of Savoy, he moved to Milan where he attended the conservatory “G. Verdi”, studying with Amilcare Ponchielli. He graduated in Composition in 1883 with the work, Capriccio Sinfonico.
During the Milanese years, the Maestro lived like a young bohemian until he met the publisher Giulio Ricordi, which marked the beginning of his career as a musician. His first works were then created: Le Villi (1884) and Edgar (1889). Meanwhile, through the union with Elvira Bonturi, the Maestro’s only son, Antonio, was born in 1886.
In 1891, the Puccini family moved to Torre del Lago for the summer, an ideal place for hunting and for musical inspiration. Puccini made it his refuge. In his words, “Torre del Lago, supreme Gaudio, paradise, empyrean Eden, turris eburnea, spiritual vas, royal palace…120 inhabitants, 12 houses.”

Leaving Torre del Lago due to the spoiling of the environment by a power plant fueled by the peat of the lake, Puccini moved to Viareggio in 1921 where he began his last work, Turandot. His sudden death on November 29, 1924, in Brussels following a throat operation unfortunately left his final work unfinished. The Master is buried in the chapel built by his son Antonio in his beloved house in Torre del Lago. 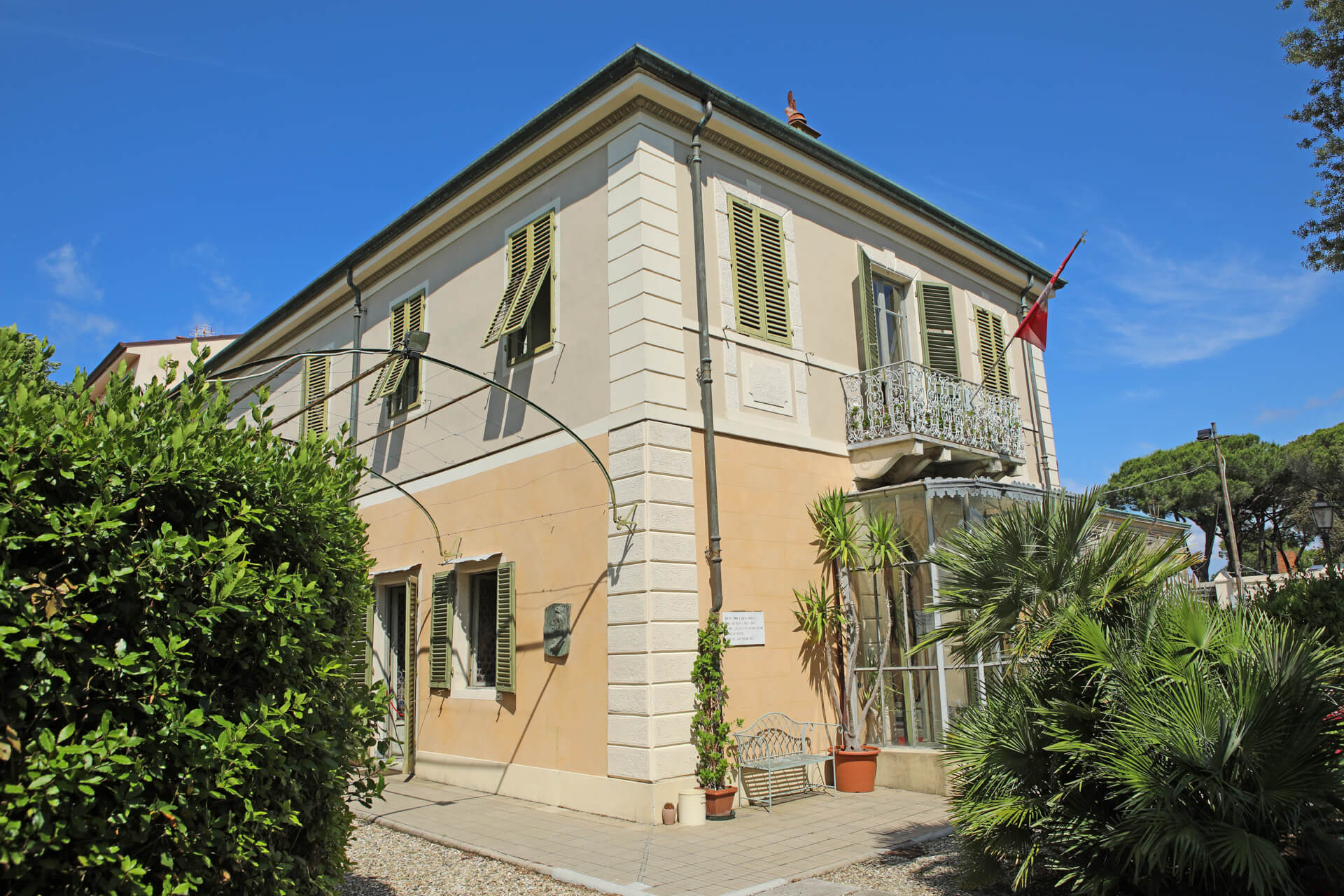 Puccini arrived in Torre del Lago in June 1891, along with his wife, Elvira, and his son, Antonio, while he was writing his third opera, Manon Lescaut. The town takes its name from an ancient watchtower that stood on the shore of Lake Massaciuccoli, transformed over time into a rustic residence originally inhabited by Venanzio Barsuglia, the one-time gamekeeper.
Puccini fell in love with Torre del Lago, a naturalistic oasis where nature is the absolute protagonist, and he decided to spend the summer and subsequent holidays here, until 1899 when he purchased the tower-house and had it renovated as his permanent residence, transforming it into the current home on two levels, in the typical liberty style of late nineteenth-century bourgeois villas, with the lake lapping the path around the garden gate.
Puccini spent most of his time in the Torre del Lago house, modifying the furnishings and decorations made by his painter friends.

The house, transformed into a museum in 1925 by his son Antonio, retains its original appearance intact.
In the omnibus room (common room) you can find the Förster piano, the portraits of the Maestro in different periods of his life, the funeral mask, and the screen, a precious gift from Japan.
The other rooms, such as the veranda, the manuscripts room, and the kitchen, collect objects of daily life: honors and awards from all over the world; paintings by “Macchiaioli Painters” friends, life and hunting companions; portraits of friends and collaborators of the Master; and his last words, written by his hand after the throat operation.
In the hunting room are kept precious rifles, hunting trophies, shoes, and boots.

In 1926, Giacomo Puccini was buried in the chapel, consisting of a small sitting room and decorated with musical allegories. Today he rests alongside his family: his wife, Elvira; his son, Antonio; his daughter-in-law, Rita; and his granddaughter, Simonetta.
In the museum, which has remained unchanged since its inception, it is possible to find the ambience in which Giacomo Puccini lived. Walking through the rooms, you can savor the atmosphere of this unique location where the Maestro, in the silence of nature, found inspiration for his immortal melodies.

It was the year 1900 when Villa Puccini in Torre del Lago, today Villa Museo, was inaugurated to welcome the Maestro’s family, who lived there for over twenty years. 119 years later, starting from May 31 2019, the upper floor “lake-view” residence shines again in all its simple refinement with original fabrics and furnishings, as Giacomo and Elvira Puccini designed it at the beginning of the last century.
In 2015, thanks to the restoration commissioned by Simonetta Puccini, granddaughter and last heir of the Maestro, the bedroom of the Puccini couple was restored back to its original 1905 appearance.
In that year, it was Giacomo Puccini who took care of the renovation of the furnishings, preferring the shades of green that were inspired by the luxuriant nature that surrounded the residence at the time.
The first floor, divided into two areas, is made up of seven rooms.

On the north side, there are three bedrooms and one washbasin room. Giacomo, Elvira, and Antonio resided here. On the south side, in addition to some closets, there are three large rooms which were often used by their relatives, frequent guests of the Puccini household. Among these were Ida, Elvira’s sister and Giacomo’s sister-in-law, and Fosca, Elvira’s daughter from her first marriage and stepdaughter of the Maestro who lived with the Puccini family until the time of her marriage to Totò Leonardi in 1902.

Following the restoration of the bedroom and the stairwell, the restoring of furnishings and pictorial decorations of other rooms on the first floor was completed. Among these are included the Master’s study, one guest room, one washbasin room, a sitting room, and the Heron Room. The opening of these spaces to the public has allowed visitors to be introduced to those familiar places suspended in time, immersed in the daily intimacy and atmosphere of the house so pleasing to the composer.

The bright and practical study retains the wardrobes, a comfortable armchair, the large writing desk, the beautiful chandelier, and a painting by Francesco Fanelli featuring the “Lake of Massaciuccoli”. All these are original furnishings, as are those in the room to the left of the stairs and those in the small living room that hosted Giacomo and Elvira’s relatives.

The bedroom of Antonio, the Heron Room, today holds furniture and objects that came from Lucca, Puccini’s birthplace.
What was once the guest room today contains the furniture from the Villa di Chiatri: a double bed; a wardrobe; two night stands; a French porcelain clock by Sevres; and a chest of drawers with a dressing table in maple wood enriched by dark wood carvings.

The floor is covered with linoleum (waterproof flooring material). Purchased by the Maestro in Detroit (USA) in the early 1900s, it has a particular parquet effect.
The washbasin room connected to the master bedroom is clear proof of the refinement and modernity of the proprietor. It is equipped with running water and the interior preserves a towel holder, linen sheets with the initials GP on them, and a beautiful leather and wood screen with his works’ heroines shown on it. 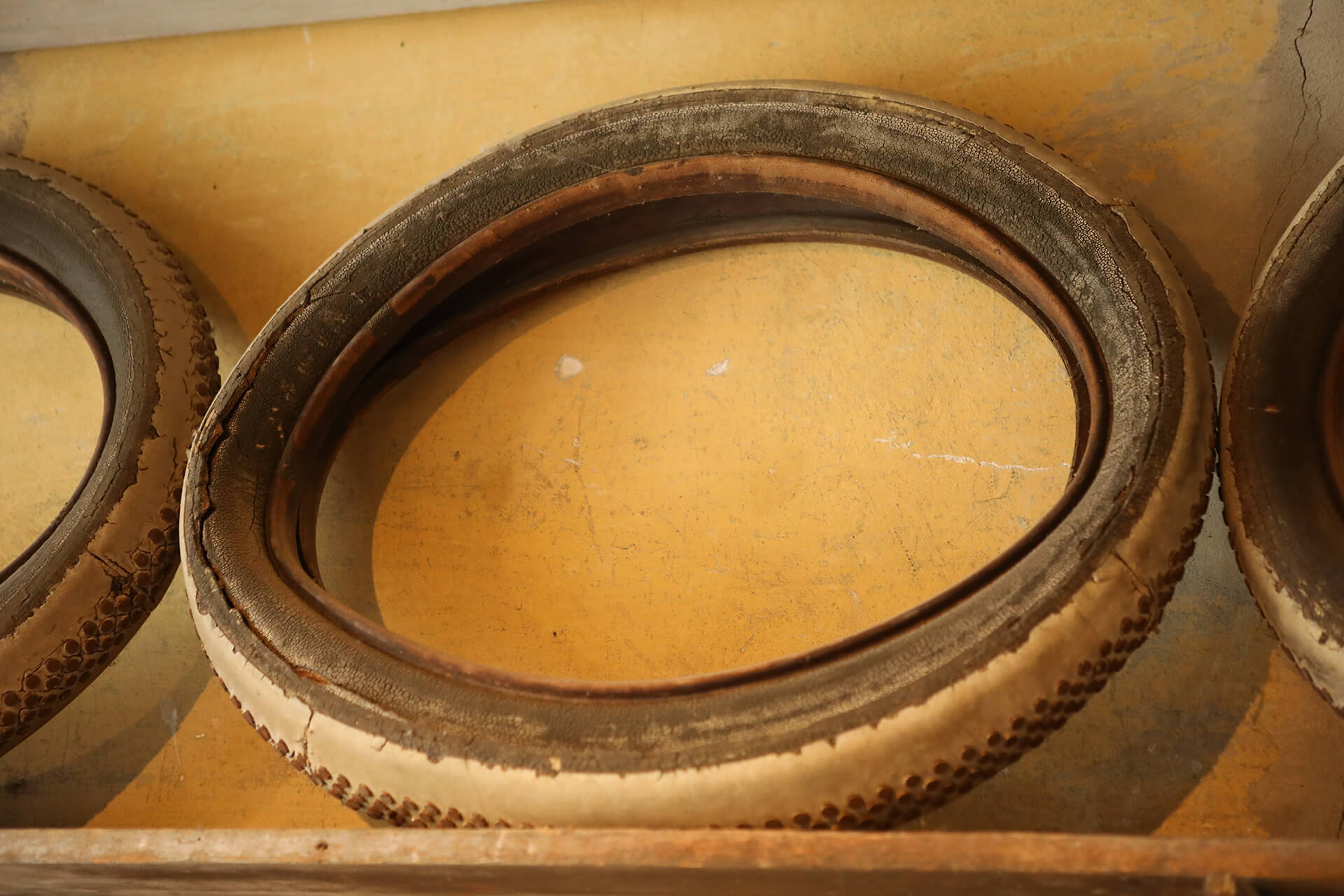 The Villa Museo Puccini shop is located in a very unique building. Housed in the old car garage, it retains its original aspect: the walls painted with fake wood; the truck bay for car repairs; and the old wheels of the Maestro’s cars. Giacomo Puccini, a great motor lover, changed cars 15 times in 23 years! Among the models he owned were a De Dion Bouton, a Lancia, and an Isotta Fraschini.
In the current bookshop you can find many items, from reviews published by the Simonetta Puccini Foundation to vintage volumes, sheet music, and many exclusive gadgets. This retail activity is exclusively reserved for the Museum’s visitors.

– Ground floor accessibility: the only step has a ramp

Giacomo Puccini’s pianos
In 2010, Giacomo Puccini’s pianos were restored. Luca Menicagli, owner of the company “Menicagli Pianoforti” of Livorno, promoted and carried out as sponsor the restoration of the two pianos existing in the Villa Museo Puccini in Torre del Lago: the Forster and the Steinway & Sons. On these two instruments Puccini worked on the creation of his immortal melodies. This was a conservative restoration which has preserved the originality of all the material. 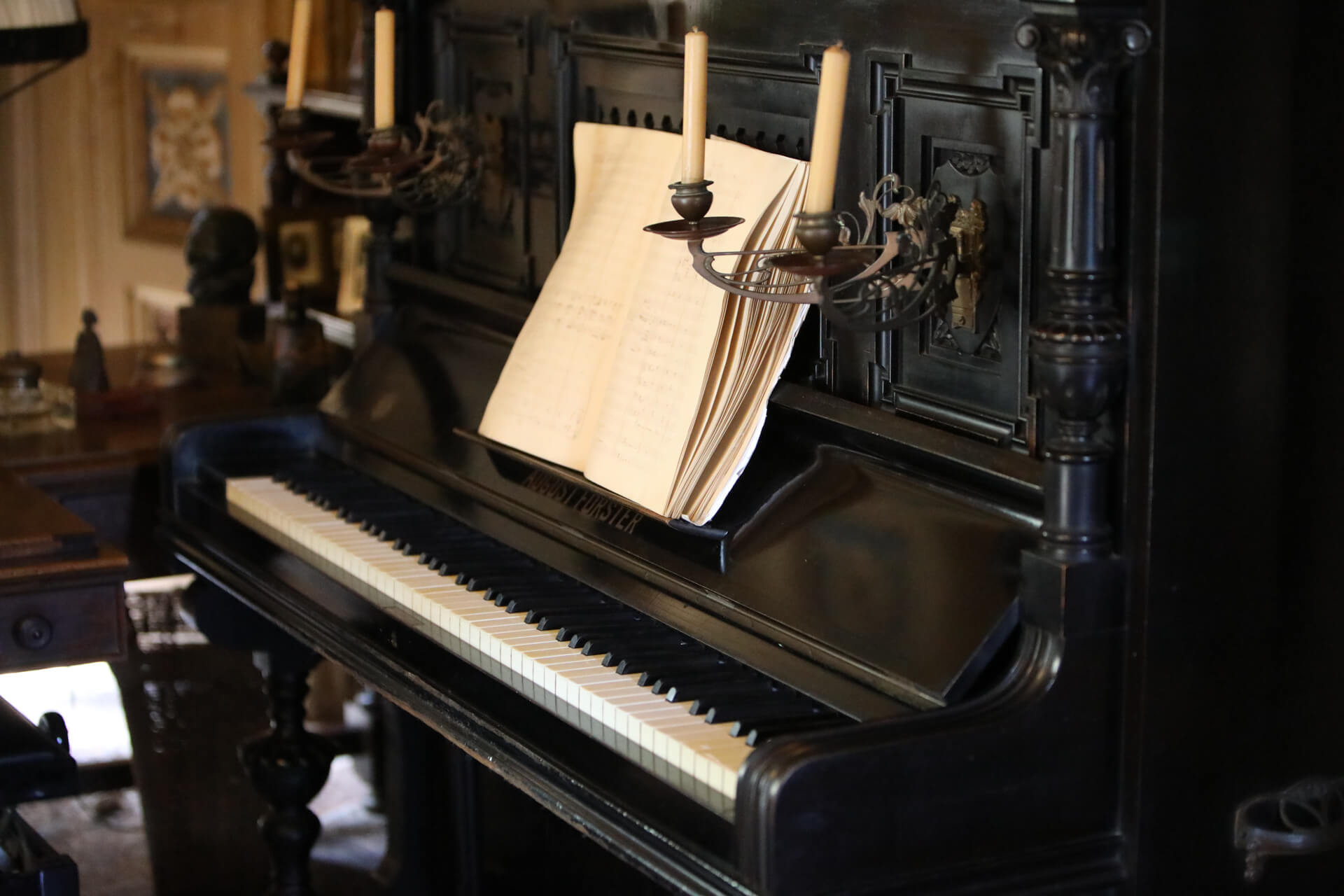 Giacomo and Elvira Puccini’s bedroom
In 2015, Giacomo and Elvira Puccini’s bedroom was once again accessible to the public with its original 1905 look, when the Master himself took care of renovating the furnishings inspired by the greenery, the lake, and the luxuriant nature that surrounded the residence.
The large brass bed, the wardrobe, the dressing table, the writing desk, and all the furniture have traveled back in time, to the point that crossing the threshold of the freshly restored ambience, we have the feeling of returning to the early 1900s, when the great composer was deep in the throes of his work and the notes of his famous operas rang out in the house.
The restoration has been made possible thanks to the contribution of: the Cassa di Risparmio di Lucca Foundation, through the person of its president, Dr. Arturo Lattanzi.
The restorers: Marco Pinna, who also facilitated the pictorial restorations of the hallway and stairwell; Massimiliano Tani for the upholsteries. 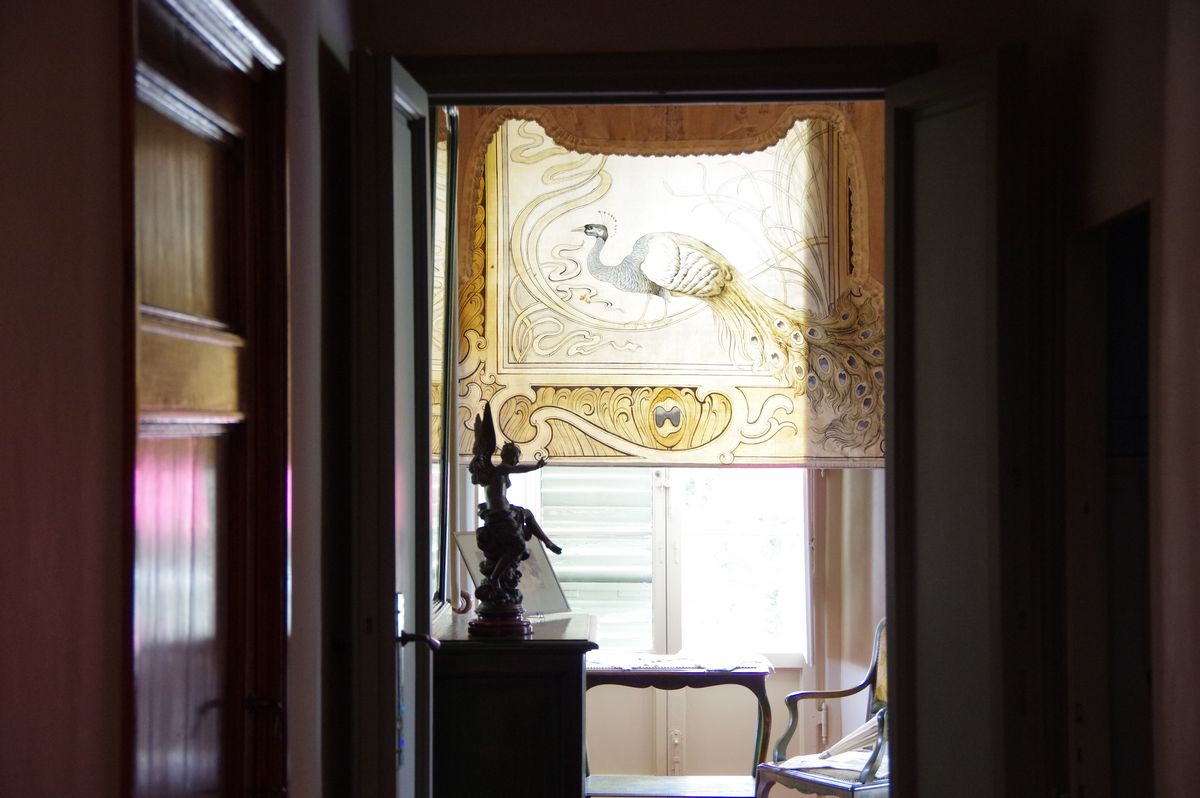 The veranda parquet (Porch)
In November, 2017, the Villa Puccini’s dining room parquet was restored with the goal of recovering the original wooden floor of 1905. The restoration is the work of the restorer, Michele Paoletti. 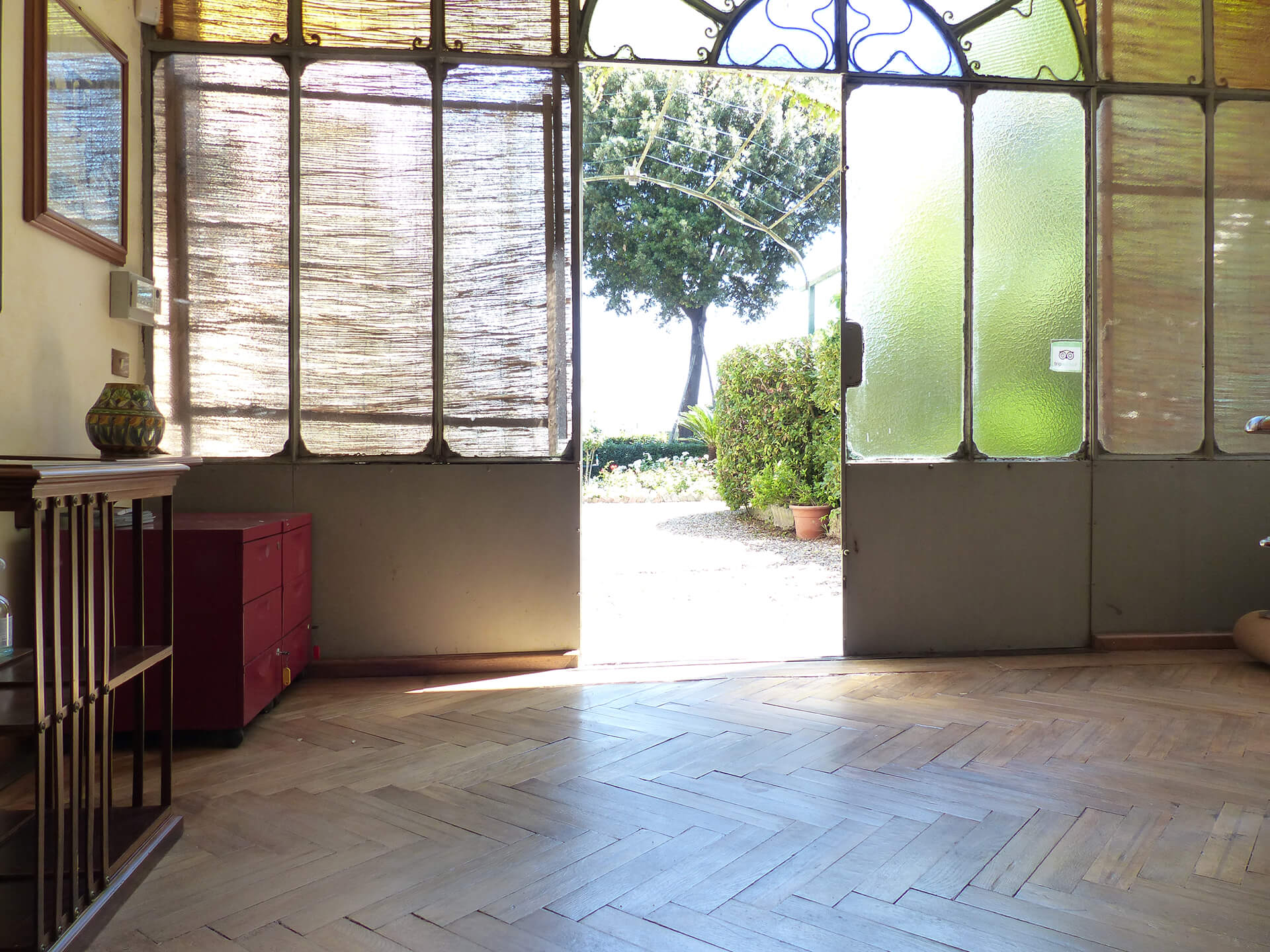 First Floor
On May 31, 2019, the Villa Puccini’s upper floor once again shone in all its simple refinement, with the original fabrics and furnishings as Giacomo and Elvira Puccini designed it at the beginning of the last century.
On the north side, there are three bedrooms and one washbasin room. Giacomo, Elvira, and Antonio resided here. On the south side, in addition to some closets, there are three large rooms which were often used by their relatives, frequent guests of the Puccini household.
The opening of these spaces to the public, through a project to set up and restore the rooms which had been closed since 1925, whose furniture has been restored to its original state by the restorer Michele Paoletti, allows the visitors to be introduced to those familiar places “suspended in time”, immersed in the daily intimacy and atmosphere of the house so pleasing to the composer. 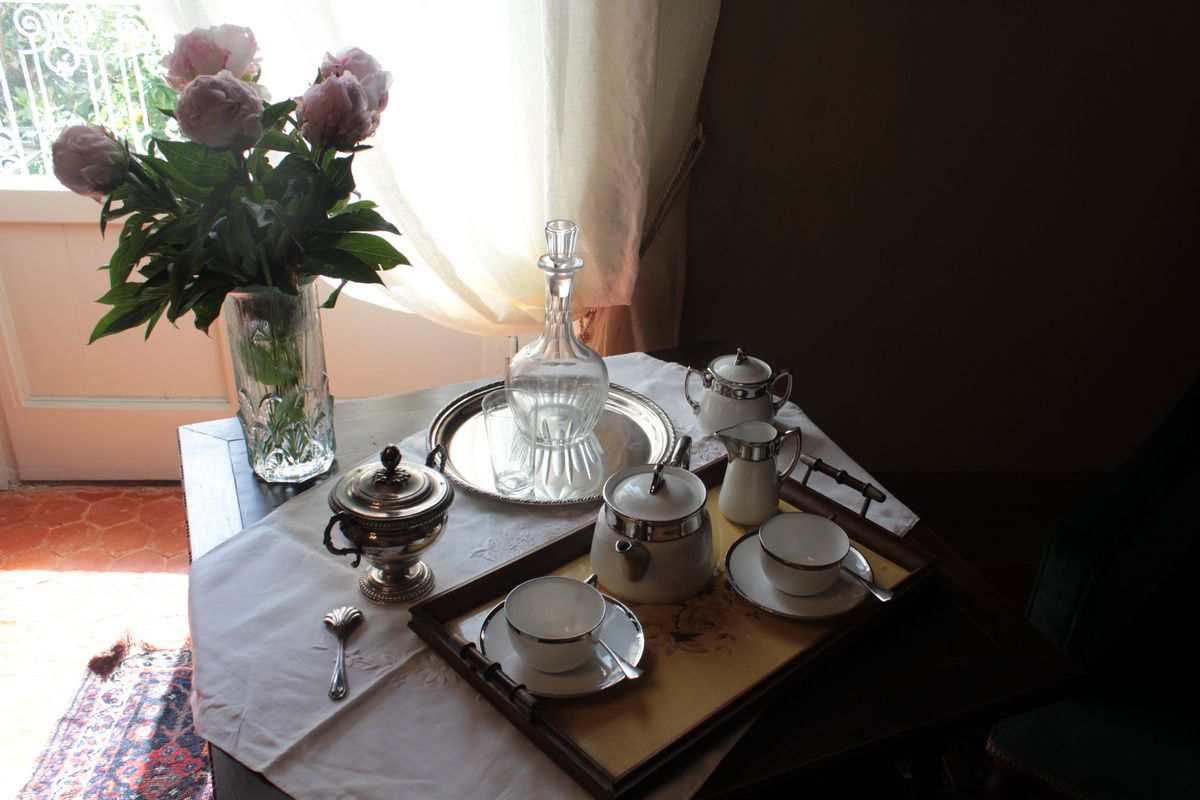